Citizens of and visitors to the UAE have access to a highly restricted version of the internet. The government actively censors a range of sites and services, including the VoIP features of popular communications channels such as WhatsApp and Skype. Thankfully, a VPN can help.

A Virtual Private Network (VPN) encrypts your internet traffic and sends it through a secondary server (in a location of your choice), switching your IP address with that of the VPN server. When you connect to a VPN, you can access content that would normally be blocked by government censorship or geo-restriction measures put in place by the content distributors.

That said, not all VPNs work everywhere. In countries like the UAE and China, there are clampdowns on VPN usage. If internet traffic is identified as VPN traffic, it will be blocked. As such, you need a VPN that can bypass these strict detection measures.

Which is the best VPN to use in the UAE? I reveal my top 5 choices below, I’ll go into more detail about each provider later, but here’s an at-a-glance look in case you’re in a hurry.

There are a ton of VPNs to choose from, but very few work reliably in the UAE. I based my list of the best VPNs for UAE on the following criteria:

Here’s my list of the best VPNs for UAE: 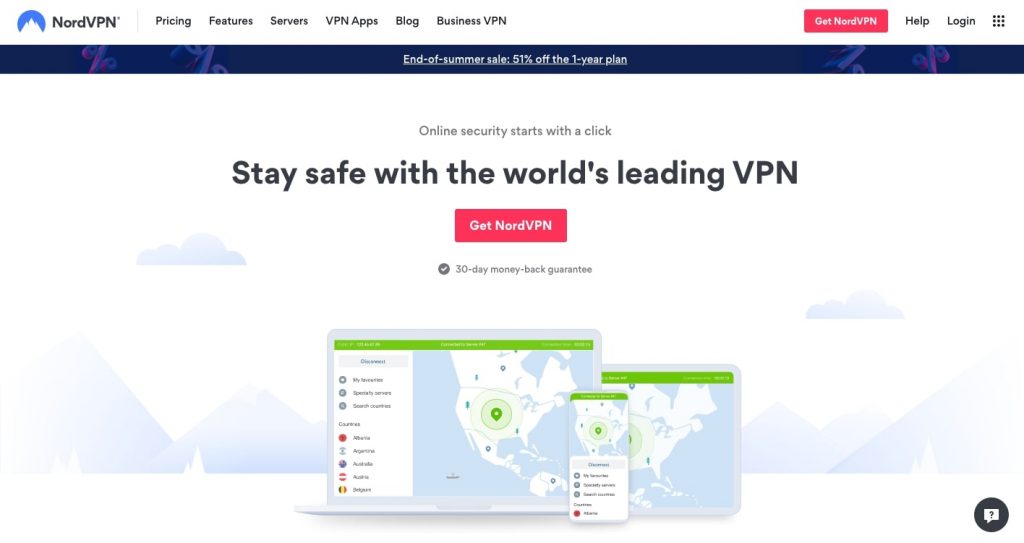 This provider operates with a zero-logs policy and uses 256-bit encryption (considered effectively uncrackable) in conjunction with perfect forward secrecy. A kill switch (in all apps except Android) and leak protection ensure you never have to worry about your IP address being leaked. Automatic wifi protection and double VPN options are welcome security extras.

You can download desktop clients for Linux, Windows, and MacOS, and mobile apps for Android and iOS. Up to six simultaneous connections are permitted. NordVPN can be manually configured with home routers. This provider offer around-the-clock support via live chat.

BEST VPN FOR UAE:NordVPN is my top pick. It has blazing speeds and operates an expansive network. Plus it boasts excellent unblocking potential and plenty of security features. A 30-day money-back guarantee is included with all plans making this a risk-free option. 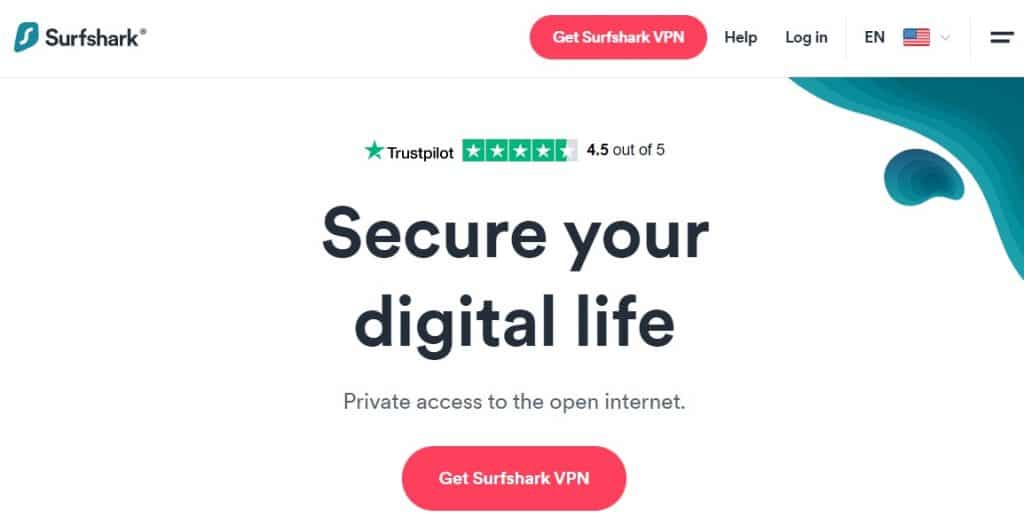 Surfshark is easy on the wallet but doesn’t scrimp on features. Its network comprises more than 3,000 servers in 65 countries, but there’s ample choice for finding a reliable connection. Surfshark is becoming well-known for its ability to access sites like Netflix and BBC iPlayer from abroad. Its Camouflage mode will help unblock content in countries dealing with strict government censorship.

Surfshark is gaining a solid reputation as a highly secure service. It has all the core features I look for in top paid providers including strong encryption, perfect forward secrecy, protection against leaks, and a kill switch in all apps. Extras include split tunneling, automatic wifi protection and a multihop VPN. Surfshark will never record any data that can identify you.

A huge bonus of this VPN is it doesn’t impose any limit on the number of devices you can connect at a given time. Apps are available for MacOS, Linux, Windows, Android, and iOS. Select home routers are supported via manual configuration. If you have problems you can always speak to a representative via live chat.

BEST BUDGET VPN:Surfshark is good for the budget-conscious with lots of security extras and no limits on data, bandwidth, or device connections. Plans come with a 30-day money-back guarantee.

ExpressVPN is an excellent alternative. It’s a speedy VPN with a broad range of servers (more than 3,000 spanning 94 countries). It can bypass censorship in the UAE without you having to take any action other than connecting to a server in a location of your choice. ExpressVPN works with a ton of streaming sites including Netflix, Amazon Prime Video, BBC iPlayer, and more.

This VPN offers a strong suite of security features including 256-bit encryption, perfect forward secrecy, a kill switch in desktops apps, and leak protection. It doesn’t maintain logs of any data that could be used to identify you or trace your internet activity. This means that even if it were forced to hand over records, it would have nothing to offer. A bonus with ExpressVPN is its flexible split tunneling feature that allows you to choose exactly which apps use the VPN.

You can connect up to five devices at a time. Apps are available for Windows, MacOS, Linux, iOS, and Android. ExpressVPN even has custom firmware, so it’s easy to set up on your home router. 24/7 live-chat support is available in case you run into issues.

GOOD ALL-ROUNDER:ExpressVPN is a solid pick for a UAE VPN. It’s fast, reliable, and unblocks a ton of content. All subscriptions include a 30-day money-back guarantee.

PrivateVPN is an even smaller provider with just 150 servers in 60 countries. But it manages to keep up with rivals on many other facets including speed, privacy, and security. Plus it works well in the UAE and other heavily restricted countries such as China. You can use it to unblock Amazon Prime Video, Netflix, BBC iPlayer, and more.

This service won’t log your activity or connection data. It has a kill switch in the Windows app and leak protection to keep your IP address safe. These features are backed by 256-bit encryption and perfect forward secrecy.

PrivateVPN allows up to six simultaneous connections. Mobile apps are available for Android and iOS, and easy-to-use desktop clients can be downloaded for Windows and MacOS. To cover all devices in your home, you can configure the VPN with certain home routers. You can also manually configure PrivateVPN with Linux devices. Live-chat support is available but it’s not quite 24/7.

VyprVPN stands out when it comes to circumventing censorship due to its Chameleon protocol. This enables you to access whatever content you like from anywhere in the world. VyprVPN can even unblock stubborn services like Netflix and BBC iPlayer. It has over 700 servers in around 70 countries to choose from.

This provider doesn’t disappoint on the security front. Your traffic will be secured with 256-bit encryption with perfect forward secrecy. There’s also a kill switch (built into the desktop apps) and leak protection. VyprVPN no longer retains records of any personally identifiable information.

Download apps for Windows, MacOS, iOS, and Android. Support for Linux and some routers is available through manual configuration. You can connect up to five devices at any given time under the premium plan.

HIDES YOUR TRAFFIC:VyprVPN uses a special protocol to ensure your traffic remains undetected. It’s fast, private, and secure, and impresses with its unblocking potential. Plans include a 30-day money-back guarantee.

Can I use a free VPN for bypassing censorship in the UAE?

With just a little bit of research on VPNs, you’ll quickly uncover a ton of free options. Anything free is always attractive but I recommend steering clear. To begin with, it’s highly unlikely that these services will work in the UAE. Free VPN providers tend to be cash-strapped and wouldn’t have the funds required to invest in the technology needed to evade detection.

Regardless, they typically have a very small selection of servers, long wait times to connect, and data caps limiting what you can do online.

Free VPNs perform poorly on the security front too. Many use weak or no encryption and some act as vehicles for malicious programs. Their privacy standards are low as well—many free VPNs make their money by tracking user activity and selling the data to third parties.

As you can see, paying a few dollars per month for a privacy-conscious VPN is well worthwhile.

If you haven’t used a VPN before, not to worry. These services sound a bit complex but they’re actually very simple to set up.

Here’s how to set up a VPN in the UAE:

If you run into issues, try clearing cookies and reloading the page. Note that it’s best to set up your VPN before traveling to the UAE, if possible (more on that below).

Are VPNs legal in the UAE?

The use of VPNs in the UAE is a bit of a legal gray area. It’s generally understood that VPNs are only illegal if they are used to commit a crime, which makes sense. This includes accessing illegal content such as sites involving pornography, gambling, and anti-religious hate speech.

As per a law introduced in 2016, the penalty for cases where “internet protocols are manipulated to commit crime or fraud” is jail time and a fine of up to Dh2 million ($544,000).

That said, it’s possible that downloading a VPN app while in the country could open you up to monitoring. While this isn’t an issue if you’re not doing anything wrong, no one likes to be monitored. As such, you might want to download your apps before you arrive in the UAE.

I do not condone or encourage the use of VPNs to commit or cover up illegal activity. It’s also worth bearing in mind that rules are subject to change, so you should consult up-to-date local laws before connecting to a VPN.

Is Netflix available in the UAE?

Netflix launched in the UAE in 2016. However, the UAE Netflix library has far fewer titles than many of its international counterparts, such as Netflix US and UK.

A VPN can help you access other country’s libraries. Just connect to a server in the corresponding country, for example, the UK or US, and log into your Netflix account as normal. You should now have access to the full range of content for that country.

What else can I use a UAE VPN for?

VPNs are incredibly useful tools. So far I’ve discussed unblocking geo-restricted content and bypassing censorship, but they have other uses too.

While on the go, many internet users will find themselves connecting to public wifi. These open hotspots are notoriously unsecure and offer an ideal opportunity for hackers to steal your data. A VPN encrypts all your internet traffic, so if you connect to a VPN while using public wifi, all your data will remain safe. Even if someone intercepts your internet traffic, it will be unreadable.

A VPN can also be handy for spoofing your location to access online banking. When traveling abroad, it’s common for bank fraud alert systems to lock customers out of their accounts. While this is good for security, it can be a huge inconvenience if you have no access to funds. Connecting to a VPN in your home country can help bypass some fraud alert systems, allowing you to use online banking services without the added stress.

Best VPNs for Firestick & how to Install

How to get an IP Address for Switzerland with a VPN