ITV broadcasts several popular shows such as Love Island, Bridezillas, and various sporting events. It also also has an online streaming platform, ITV Hub, that allows users to stream channels and enjoy on-demand content from the network. However, ITV is geo-restricted and cannot be accessed outside of the UK. The good news is that you can use a VPN for ITV to overcome these restrictions and enjoy your favorite content from home while abroad.

In addition to the security and privacy benefits that are gained when using a VPN, you may want to use a VPN with ITV’s online streaming platform in order to watch content from the service while outside of the UK, since it is geographically restricted to that region.

Below, we have reviewed the best VPNs for iTV that will allow you to access ITV while abroad. However, here’s a summary of the best VPN offerings that are available for use with ITV:

The best 7 VPNs for ITV

When choosing a VPN for ITV, there are a few things that need to be considered. Security is important and so is the ability to unblock the service if you are abroad. With that being said, here is what I looked for when choosing the best VPNs for ITV:

Here’s my list of the best VPNs for ITV:

NordVPN has servers worldwide. In fact, this provider has over 5,000 servers. This includes servers that are geared towards increased privacy or even servers that provide a dedicated IP address. In general, NordVPN’s servers are great for streaming and provide the speeds necessary to facilitate this activity. If you wish to unblock ITV while outside of the UK, this VPN provider has servers in the UK that can allow for this. In addition to unblocking ITV, NordVPN can also access BBC iPlayer, Netflix, and Prime Video.

Nord takes security very seriously and has strong security measures in place such as 256-bit AES encryption. In addition, there is an app-specific kill switch, an automatic ad-blocker, a malware scanner, and protection against DNS, IPv6, and WebRTC leaks. No logs are stored by this service. This ensures that users’ information is kept private and isn’t shared with any third parties.

There are NordVPN apps available for macOS, iOS, Windows, and Android. Routers and Linux devices can be manually configured to work with this service. Six simultaneous connections are allowed and customer support is available 24/7.

BEST VPN FOR ITV:NordVPN is my top choice for streaming ITV. It has fast connection speeds, offers strong security measures, and provides great customer service. A 30-day money-back guarantee is provided as well.

Surfshark offers the best bang for the buck when it comes to VPNs for ITV. It has over 3,200 servers in 65 countries. This includes servers in the UK for users who may want to access their ITV streaming subscription while abroad. For users who have multiple streaming subscriptions that they might want to access while abroad, Surfshark can access Netflix and Hulu as well.

Surfshark provides strong security as well. It provides 256-bit encryption, a kill switch, protection against IPv6, WebRTC, and DNS leaks, and traffic scrambling. No personally identifiable information is stored by this company either. Cryptocurrency payment options are available which increase the level of anonymity since your name isn’t linked with your Bitcoin wallet, unlike with a credit card.  Customer service can be reached 24/7 via the provided live chat.

Apps can be downloaded for Linux, Android, macOS, Windows, and iOS. It’s also possible to manually install this VPN on some routers. One of the stand out features of Surfshark is that it allows an unlimited number of simultaneous connections. This is a great offering for users who have a large number of devices in their household.

MOST AFFORDABLE VPN FOR ITV:Surfshark is an affordable choice which maintains a high level of performance despite its cost. It can unblock many streaming services, including ITV while abroad and it allows users to stream HD video content without any hassle. It can also protect an unlimited number of devices simultaneously and comes with a 30-day money-back guarantee.

ExpressVPN is known for its streaming prowess. Its network of over 3000 servers is quite fast and lets users stream content from services such as ITV without any hassle or buffering. It is capable of unblocking ITV if you care to use this service abroad and it can do the same, if you are outside of the home locale, for Netflix US, YouTube TV, or Hulu. Its interface is approachable and easy to use for beginners too.

It has strong security measures in place and offers features such as 256-bit AES protection, perfect forward secrecy, a kill switch, and protection against WebRTC, IPv6, and DNS leaks. There is also a .onion site which is accessed over the anonymous TOR network. Users can also pay with cryptocurrency, ensuring increased anonymity since their name isn’t attached to their cryptocurrency wallet.

ExpressVPN offers apps for a number of operating systems. These include iOS, Android, Windows, Linux, and macOS. It can also be installed on supported routers.

SOLID STREAMING OPTION:ExpressVPN is a solid option for streaming. It gives users access to a large server network which provides the speeds necessary for using streaming services such as ITV. Users get a 30-day money-back guarantee with their subscription.

CyberGhost has the largest number of servers out of all of the other providers I have reviewed here. It allows for easy streaming and can unblock services such as ITV and Netflix easily. This provider is capable of accessing several other services such as Netflix too.

Strong security is in place, with users protected by 256-bit AES encryption and IPv6 and DNS leaks. A kill switch is also included. No personally identifiable information is stored either.

Apps for macOS, Windows, Android, and iOS are also available.

LARGE SERVER NETWORK AND EFFECTIVE STREAMING:CyberGhost has a large server network which makes it easy to find the servers you need. It is beginner-friendly too and offers 24/7 live chat support. A 45-day money-back guarantee is included with subscriptions.

PrivateVPN is a smaller VPN provider, offering just over 200 servers. However, it is still fast and very reliable. It gives users secure connections and lets them access streaming services such as ITV and even Netflix if they are abroad.

Security is in this provider’s DNA too. They offer 256-bit AES encryption as well as protection from IPv6, WebRTC, and DNS leaks. This ensures that users have a secure online experience. This service doesn’t store any personally identifiable user information. Payments are also accepted via cryptocurrency. These measures emphasize PrivateVPN’s focus on privacy and security.

Apps can be downloaded for Android and iOS mobile devices as well as for macOS and Windows. Linux systems and routers can be manually set up to work with this service. One thing to note, however, is that live chat isn’t supported. The support team is only available during regular business hours. With that being said, the quality of support is good and the support team can even remotely connect to your computer to help you with the setup process if you allow them to do this.

STRONG PRIVACY AND SECURITY MEASURES:Privacy and security are in the DNA of PrivateVPN. Its small network of servers is fast and secure enough to allow for the safe streaming of many different services such as ITV. Subscriptions include a 30-day money-back guarantee.

Atlas VPN is a newer VPN provider, but it doesn’t skimp on quality. It has 750 servers in 40 locations, offers fast connection speeds and can access many services such as ITV and Netflix US.

Strong security options are in place such as 256-bit AES encryption, a kill switch, and protection against DNS, WebRTC, and IPv6 leaks. No logs are stored with this service. Atlas VPN has apps for Windows, macOS, Android, and iOS and supports an unlimited number of connections.

FAST SPEEDS AND UNLIMITED CONNECTIONS:Although Atlas is a newer player,: it can carry its weight. It’s fast enough for streaming ITV and offers a 30-day money-back guarantee.

Private Internet Access (PIA) offers over 3000 servers in 42 countries. This gives users several options for choosing an IP address. This also opens up many opportunities when it comes to unblocking streaming services. PIA has servers in the UK which can access ITV’s online streaming service. In addition, PIA can access other services such as BBC iPlayer, YouTube TV and Vudu.

PIA users should expect strong security, since this VPN provides features such as AES 256-bit encryption, a kill switch, and split tunnelling functionality. PIA also offers a dedicated IP address addon. No logs are stored by this provider either.

Five simultaneous connections can be maintained and apps are available for Windows, macOS, Linux, iOS, and Android.

GOOD CHOICE FOR ITV:PIA has servers in the UK and strong security, making it a good choice for streaming ITV. It can also unblock the service if needed.

Methodology for finding the best VPN for ITV

While there are many VPN services available, not all of them are equal. I carefully examined many different VPNs to find the best option for ITV. Here are some of the things I looked at when choosing the best VPNs for ITV:

You can find out more about my VPN testing methodology here.

The allure of a free VPN can be enticing. However, free VPNs simply don’t have the same resources as their paid counterparts. Free VPNs have less servers which can get overloaded easily. In addition, free VPNs do questionable things like selling your data to third parties for a profit. In many cases, there are also daily data limits that will prevent you from streaming any substantial amount of video.

Do I need a TV License to watch ITV online?

UK residents need a TV license to watch any live broadcast that is shown on a streaming service at the same time as on regular TV.

Yes, it is normally free. However, with an ITV Hub+ paid subscription, you can watch ITV online without ads.

Is using a VPN to watch ITV online legal?

Yes, using a VPN to watch ITV is legal. If you are using a VPN with ITV, the most that could happen is that ITV may try to block you from watching with a VPN, especially if you are trying to unblock the service. However, the VPNs on this list are effective and we haven’t encountered this problem with any of the options on it.

Yes, VPNs are safe to use. In fact, it is safer to use the internet while connected to a VPN. When using a VPN, your IP address will be masked, ensuring that your identity will be protected when you're online. Your connection will also be encrypted and you will be granted increased security in environments such as when you're connected to open WiFi networks. Reputable VPNs have high security standards and will keep you safe online.

Yes, using a VPN is legal. However, using a VPN to carry out an illegal act is not. Using a VPN while breaking the law doesn't grant any protections. WIth that being said, don't take anything in this article as legal advice.

How to get a Spanish IP address from anywhere in 2022

How to watch US Netflix in Australia 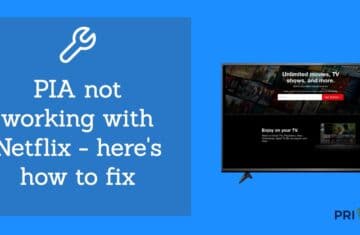 PIA not working with Netflix – here’s how to fix