5 Best VPNs for 7plus: Watch Channel 7 Online From Abroad

5 Best VPNs for 7plus: Watch Channel 7 Online From Abroad

Anyone who has tried to watch 7plus outside of Australia has probably already seen the error message that appears instead of the movies and shows they were hoping for. Like most streaming websites, 7plus has geo-restrictions which makes it difficult to view content from outside the country. This includes Australian residents who attempt to watch 7plus while traveling abroad. It’s disappointing to be blocked from your home subscriptions, but don’t worry—a VPN for 7plus will let you watch your usual content on the platform wherever you are.

A VPN, or a Virtual Private Network, encrypts the information traveling to and from your device and routes it through an intermediary server in a location of your choosing, usually one in another country. Your true IP address, and therefore your true location, is substituted with the IP address of the VPN server. This means that you can keep watching your favorite hit shows on 7plus, like Grey’s Anatomy and Hell’s Kitchen.

In this article, I take a detailed look at my top six VPN choices. For now, here’s a short summary of the best VPNs for 7plus:

The best VPNs for 7plus

The growing number of VPNs on the market can make it difficult to decide which VPN to choose for watching 7plus. I made my top five choices based on the following criteria:

You can read more about the way I review each service in my VPN testing methodology later in this article.

Here are the 7 best VPNs for 7plus:

NordVPN is my first choice for watching 7plus and protecting your online security. It runs a sizable server network of over 5,200 servers in 59 countries around the world and features more than 190 streaming servers in Australia. NordVPN reliably works with major streaming platforms like BBC iPlayer, Netflix, Hulu, and 7plus.

NordVPN adheres to a strict no-logs policy so that none of your online activities are recorded. Subscribers can protect up to six devices at once with a single account.

Surfshark is my top budget pick. It provides over 3,200 servers to choose from in 65 countries around the world, including more than 60 servers in Australia. Surfshark easily bypasses geographic restrictions on platforms like 7plus and Hulu while streaming at high speeds with little to no buffering. It is one of the few providers that offers unlimited simultaneous connections.

Surfshark protects your privacy with 256-bit AES encryption, IPv6 and DNS leak protection, an app-specific kill switch, an ad blocker, and an automatic malware scanner. Surfshark includes a NoBorders mode for usage in countries with particularly strict government censorship. Surfshark keeps no records of your personal data so none of your online activities can be traced back to you. 24/7 customer support is available over live chat.

UNLIMITED CONNECTIONS:Surfshark is a secure and affordable option. Protect every device you own with Surfshark. Its server network delivers fast speeds for HD streaming and unblocks just about anything. A 30-day money-back guarantee is included.

ExpressVPN’s 3,000+ servers in 94 countries get fast and durable connection speeds for streaming 7plus, Netflix, Hulu, and Amazon Prime Video. Its Australian servers are located in Sydney, Melbourne, Perth, and Brisbane.

This VPN protects your internet traffic with 256-bit AES encryption and perfect forward secrecy. Other security features include protection against DNS leaks and a kill switch that prevents you from browsing the web without protection in case you suddenly lose connection to the VPN.

ExpressVPN is a no-logs provider that keeps you anonymous while using the web, and it even accepts payments in Bitcoin for anonymous registration. It provides an allowance of five simultaneous connections, and customer support is available 24/7.

ExpressVPN apps are available for Windows, Linux, MacOS, iOS, and Android, and it can be manually configured on some network routers.

STREAM ANYTHING ON 7PLUS:ExpressVPN is fast and easy to use. Features plenty of industry-standard security features to protect your identity while watching 7plus from abroad. Give it a try before you decide by using its 30-day money back guarantee. 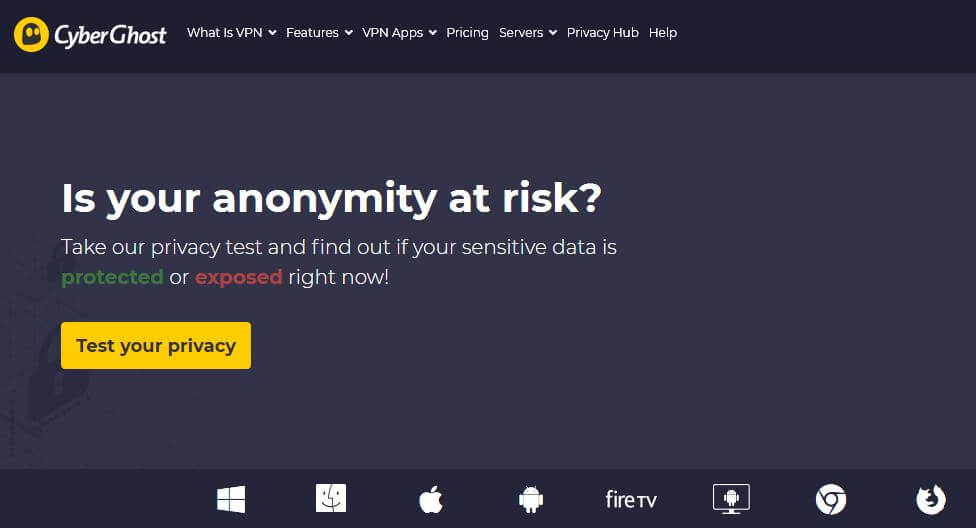 CyberGhost is a good introductory VPN for first-time users. Its 7,000+ servers in 91 countries (including 179 in Australia) make CyberGhost the owner of the largest server network on this list. Its wide geographic variety provides access to an equally wide variety of international streaming content and features servers optimized for torrenting and streaming on websites like 7plus, Amazon Prime Video, and Sky Go. Its generous allowance of 7 simultaneous connections will also protect most or all of your devices.

CyberGhost excels at both streaming and security. It uses 256-bit AES encryption to protect your data as well as ad- and malware-blocking functionality, an automatic kill switch, and protection from IPv6, port forwarding, and DNS leaks. CyberGhost keeps no logs of user data and is not subject to any data retention laws in its home country of Romania.

Apps are available for Windows, macOS, iOS, and Android. Manual configuration is required for Linux systems and supported routers.

IPVanish struggles with Netflix, but its network of 1,600+ servers in 75 locations is capable of unblocking streaming platforms including 7plus, HBO, and Comedy Central. It consistently attains fast speeds on its 53 Australian servers and offers unlimited simultaneous connections to protect your whole household.

Its security offerings include strong 256-bit AES encryption, OpenVPN traffic obfuscation, regular IP address changes, an automatic kill switch, and the option to block local traffic. You will be able to browse the web with peace of mind thanks to its no-logs policy.

SECURITY FOCUSED:IPVanish protects every device. Easily unblocks 7plus with its 50 Australian servers, but isn’t the best with Netflix. Fast, private, and lightweight apps for most platforms. 30-day money-back guarantee.

My Method: How I find the best VPNs for 7plus

Each VPN is on this list has been tried and tested by me, using strict criteria. Here are just some of the things I look at when assessing a VPN:

Click here to find out more about how I test VPNs.

How to watch 7plus from abroad

Setting up a VPN with 7plus is a fast and easy process. Wherever you are in the world, all you have to do to watch 7plus is the following:

VPNs for 7plus FAQ

Can I use a free VPN to watch 7plus?

I’m frequently tempted to save my cash by opting for a free VPN, especially when there are so many to choose from. But don’t forget: free VPNs need to make a profit just like any other business. Since they don’t make their money by selling subscriptions, most free providers profit from collecting their users’ personal data and selling activity profiles to third-party advertisers, which are then used to deliver intrusive advertisements back to the user. Some free VPNs have been known to spread malware and don’t even encrypt your connection. Keep in mind this rule of thumb: if an online service is free, that means you are signing up to be the product, not the client.

You’re not likely to get a decent quality of service with a free VPN either, especially if you want to stream HD video. Most free providers lack the resources to own a network of more than a handful of servers, which are almost always overloaded with more users than the infrastructure can handle. This results in slow, inconsistent speeds and a frequent loss of connection.

Why isn’t my VPN working with 7plus?

Streaming services work around the clock to blacklist VPN servers and proxies, so you may have to try out a few different servers before you can find one that can unblock 7plus. You may also need to clear your browser’s cache and cookies to rid your device of any lingering location identifiers. If you’re still having trouble accessing 7plus, contact your VPN provider’s customer support team for further assistance.

Why do you need a VPN to stream 7plus outside Australia?

Most streaming services restrict their viewership to the regions in which they own the broadcasting rights. It costs a lot of money to acquire the broadcasting rights to show certain content in certain parts of the world, so the streaming services are contractually bound to filter out viewers from unlicensed areas. 7plus is an Australia-based streaming platform that would breach its licensing agreement if it allowed anyone outside of Australia to tune in, hence the geographic firewall.

What devices support 7Plus?

Just about every internet-connected device is compatible with 7plus. Whether you want to watch 7plus on desktops like Windows or MacOS, or with mobile devices, Amazon Fire Stick, Chromecast, Apple TV, game consoles, and a variety of smart TVs, you should have no problem watching 7plus.

Can I watch 7Plus abroad on a smart TV?

Yes, you can watch 7plus content on supported smart TVs. The official website states that its app is compatible with several popular devices including Samsung TV, Apple TV, Android TV, LG TVs from 2016 and later, and many others.

If your smart TV doesn’t provide a 7plus app, you can always access 7plus with the built-in web browser or connect your TV to a streaming box device, such as a Fire Stick or Chromecast device.

What can I watch on 7plus?

7plus offers a wide range of popular shows and movies on its platform, including: